Mom, The Hellenic Society for the Study and Protection of the Monk seal

MOm/ The Hellenic Society for the Study and Protection of the Monk seal is a Greek non–governmental environmental organization with the legal status of a Non–profit association. MOm is active in the protection and promotion of the coastal and marine environment of Greece, through the protection of the Mediterranean monk seal, which is the only seal species in the Mediterranean Sea and the most endangered seal on earth.
The financial resources of MOm originate from the memberships of our supporters, donations from private entities, selected partnerships with national, European and international bodies, and from nationally and European-funded programs. MOm is subject to regular financial auditing by Certified Public Accountants – Auditors. 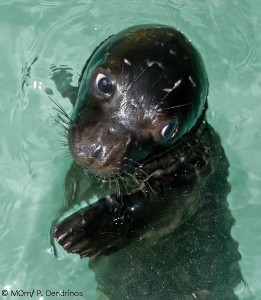 The main goal of MOm/ Hellenic Society for the Study and Protection of the Monk Seal is the conservation of the natural environment and the biodiversity of Greek seas, through the protection of the critically endangered Mediterranean monk seal (Monachus monachus). MOm strives for the survival of the only seal species in the Mediterranean Sea and for a healthy marine environment for the present and future generations!
In order to achieve the above, MOm works tirelessly on two different, but highly related fronts. Our aim is to:
• Reduce human – related monk seal mortality
• Preserve the last remaining habitat for the critically endangered Mediterranean monk seal

Important Areas
The largest population of the critically endangered Mediterranean monk seal lives in Greece and is estimated to number approximately 300 individuals. Monk seals are widely distributed throughout the entire coastline of the country and show a strong preference for isolated and inaccessible islands, islets or parts of the coastline on the mainland. The largest and most closely monitored populations are those at the Northern Sporades Islands and at the Kimolos – Polyaigos island complex. The population at the Northern Sporades Islands (which includes the National Marine Park of Alonissos, Northern Sporades) has been closely monitored by MOm since 1988 and is considered to number more than 50 individuals. Another 50 individuals are also believed to live at the Kimolos – Polyaigos island complex in the southwestern Cyclades islands. Important reproductive populations of the species can also be found at the islands of Northern Karpathos and Saria (this population is estimated to number approximately 25 individuals) and at the Ionian Islands (i.e., Zakynthos and Cephalonia). In recent years, the largest population of Mediterranean monk seals in Greece was discovered at the island of Gyaros, in the northern Cyclades Islands, and has been estimated to number approximately 60 individuals.
Studying the distribution of the Mediterranean monk seal in Greece is conducted mainly through the evaluation and mapping of information received by the Hellenic Rescue and Information Network of MOm (RINT) and through the collection of on-site information during the monitoring of important monk seal populations in the country. 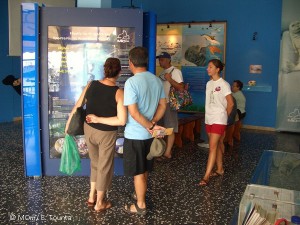 Environmental Education
Environmental education is one of the most useful tools in the effective conservation of the natural environment, and is therefore also a cornerstone of MOm’s activities. MOm carries out environmental education activities throughout Greece with a special focus on coastal and insular areas. The goal is to educate school children, our future generation, about the critically endangered status of the Mediterranean monk seal and its habitat and how they can become active in their protection. This is done by challenging their learning process and their critical thinking. The environmental education programs of MOm have been officially approved by the Hellenic Ministry of Education and have been attended so far by more than 250,000 school children in the country.
Furthermore, each year MOm carries out during the summer months the environmental program “The school of the monk seal”. At the Information Center of MOm at the island of Alonissos young children learn about environmental protection through a variety of interactive activities, such as theatrical plays, treasure hunts etc. The Environmental Center has also a children’s library with more than 1,300 different books.
Acknowledging the increasing role of the internet in the education process, MOm has also developed several educational websites:
• www.monachoulis.gr. This is the main environmental education website of MOm, containing information about the Mediterranean monk seal and the environmental education material of MOm. The target group of the site are school children but also teachers seeking to enrich their curriculum with information regarding the protection of the Mediterranean monk seal and the marine environment in general.
• www.thalassapedia.gr/en/. This website was created within the framework of the European program Life “Thalassa” and contains information regarding the marine mammals in Greece, the threats they face and ways to help save them.
• http://mofi.mom.gr/ekpaideysi.htm: This is the educational outlet of the project MOFI that was carried out by MOm in 2006 – 2009 throughout coastal and insular Greece with the aim of mitigating monk seal – fishery conflicts. This website contains a link to a book on sustainable fisheries.
If you want to learn more about the environmental education programs of MOm, please contact MOm by phone at +30 210 5222888 or by email at info@mom.gr.