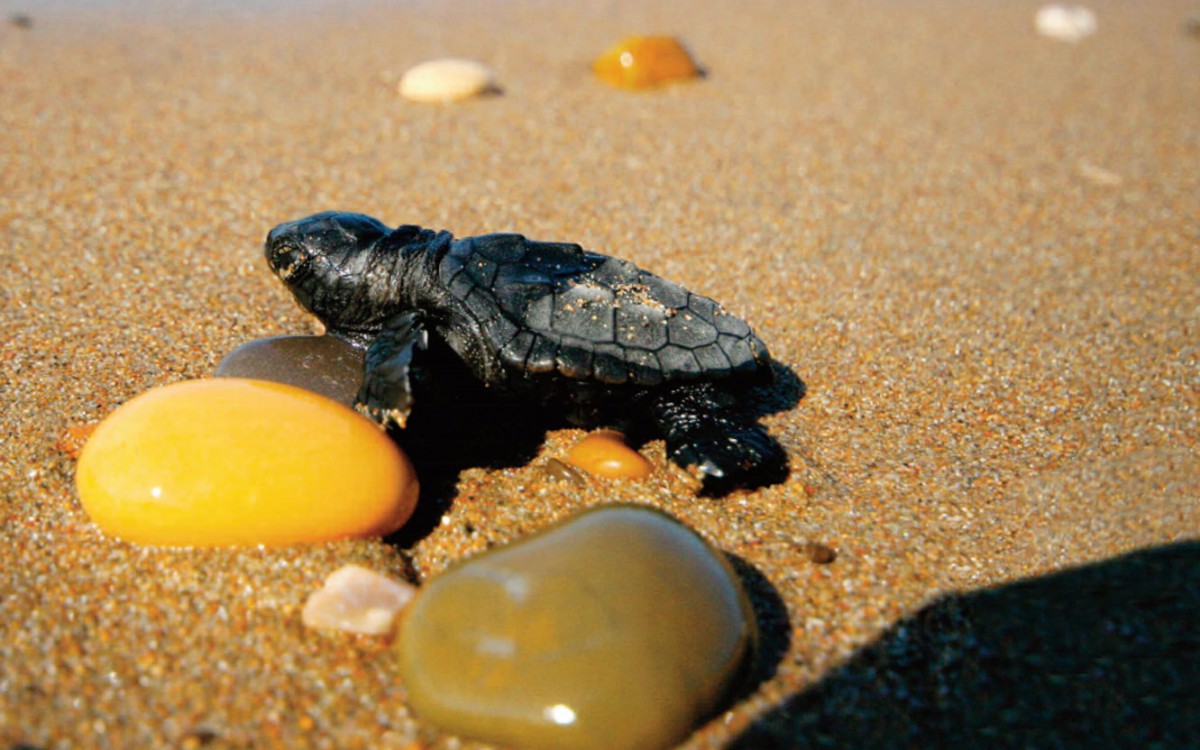 After preliminary surveys carried out in 1989, ARCHELON identified a significant number of loggerhead sea turtle (Caretta caretta) nests along some of Crete’s beaches. Since then, projects for the monitoring of the reproductive activity, protection of nests, and public awareness take place at three of the most important nesting areas on the island, and in particular in Rethymno and the bay of Chania along the north coastline, and in the bay of Messara on the south. In recent years, about 21km of beach (12km in the area of Rethymno, 5km in the bay of Chania, and 4km in the bay of Messara) are monitored every summer.

Human impacts
The nesting beaches of Crete are subjected to strong pressure, primarily due to their increased use for tourism and recreation. Beach umbrellas, sunbeds, artificial lights, and vehicle use on the beach are only some of the problems that sea turtles face.

Nest Management
Due to the human impacts and natural threats, various protection measures are implemented on all nests found within the nesting areas of Crete.

All nests found during the morning surveys on the beach are checked for the suitability of their location. If they are not believed to be threatened by innundation or damage due to human activities (e.g. close to umbrellas or sunbeds) they are left where they are and a metal cage is placed above them. The cages identify the location of each nest and protect them from accidental damage by beach users. The sign they carry (in three languages: Greek, English, and German) informs the public about the purpose of the cages.

If a nest location is believed to be unsuitable, the nest is relocated to a safer part of the beach or within a natural hatchery. Hatcheries are fenced beach plots with an expected high hatching success. These are also used as a public awareness tool, since they attract the attention of beach users.

During the hatching period, the increased number of sources of artificial light on the back of the beach disorients hatchlings. They are attracted by the lights and head towards the land instead of the sea. Efforts to gradually mitigate the problem of light pollution include communication with local authorities and local business operators in order to persuade them to switch off the lights that cause disorientation. If this is not possible and the effort is unsuccessful, ARCHELON places light fences around the nests to prevent the hatchlings from disorienting. The fences, with a height of around 20cm, are made of wooden or paper boards and are inserted vertically into the sand along both sides and the back of the nest, thus creating a “path” towards the sea. This intervention significantly reduces the mortality of hatchlings caused by light pollution.

Local community cooperation
A management plan exclusively regarding the nesting beaches of Crete was formulated by ARCHELON in 1997. It suggests practical solutions for the conservation of the coastal zone and the sea turtles. The management plan was designed to be applied at a low cost while attempting to integrate sea turtle conservation and the sustainable development of the local tourism industry. Protected zones within development areas, such as Crete, can only be sustained when the local communities incorporate them to their development plans. Consequently, ARCHELON is in close cooperation with all involved local authorities and the tourism industry at a local and national level for the implementation of the management plan.

Regular communication and relations with all involved local authorities are crucial. ARCHELON is informed by the local authorities and operates as an advisor on activities that may have an impact on the nesting beaches or the sea turtles (e.g. the use of heavy machinery for cleaning beach sand).

In addition, ARCHELON promotes the incorporation of sea turtles in Crete’s tourism product by demonstrating mutual benefits. Turtles are an indication of a healthy natural environment that can be promoted at a local and international level. ARCHELON’s attempts to combat important problems the sea turtles face, such as pollution and coastal degradation, contribute towards sustaining a high quality level of tourism.

Tourist agencies prove to be an important ally for ARCHELON, since they have the ability to provide information to their customers prior to and upon arrival to the nesting areas. ARCHELON cooperates with an increasing number of tourist agencies, such as TUI, TUI Nordic, HOTELPLAN, and PURE CRETE.

Additional long-term cooperation with hotel chains such as GRECOTEL and GERANIOTIS HOTEL is crucial. ARCHELON is an advisor to the Environmental Department of GRECOTEL in issues such as coastal management. Since 2000, all four hotels operated by GRECOTEL in Crete implement management suggestions of ARCHELON relative to the reproductive habitat of sea turtles. GERANIOTIS HOTEL has offered land for ARCHELON’s volunteer camping without charge in Chania since 1995. This has had a positive contribution to the successful operation of the project.