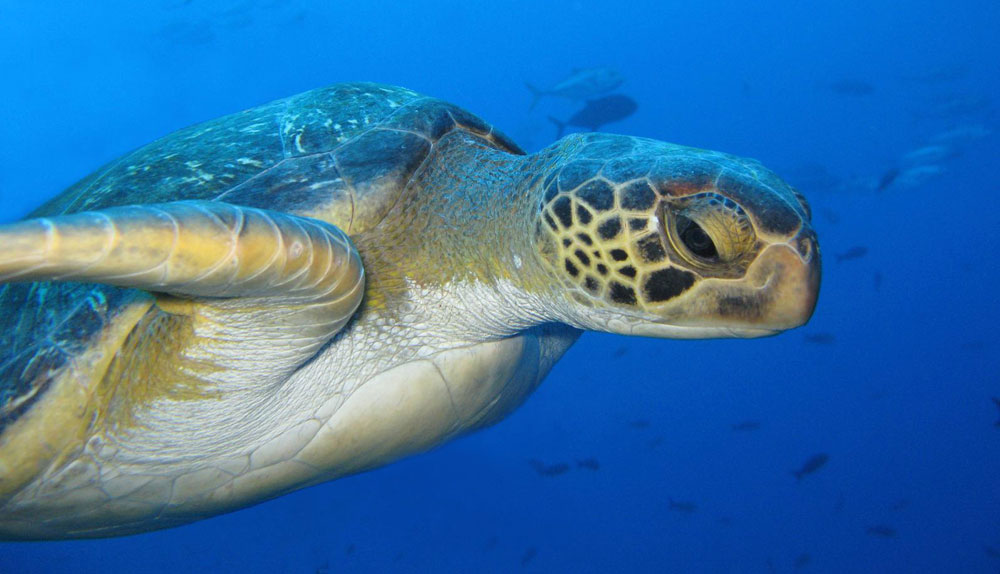 Zakynthos island is situated in the Ionian Sea off the west coast of mainland Greece. The climate is warm with plenty of sunshine. The island has an area of 406,000 ha and its coastline is approximately 110km long. However, only a small part of the coast is sandy beach. In Zakynthos, loggerhead sea turtles nest mainly on the beaches within the Bay of Laganas, which is on the southern part of the island. ARCHELON’s systematic surveys have confirmed that the Bay of Laganas is the most important nesting area for the loggerhead sea turtle (Caretta caretta) in the Mediterranean Sea. This led to the establishment of the National Marine Park of Zakynthos in 1999.

Historical background to the legal protection of the nesting beaches of Zakynthos and the marine zone of the Bay of Laganas.
Due to the importance of Zakynthos as a reproduction area for the loggerhead sea turtle in the Mediterranean, the state introduced measures for its protection since 1984. The purpose of the legislation was to control and regulate development while maintaining the quality of the nesting beaches so that the sea turtles can continue visiting Zakynthos for generations to come. The 1984 measures were further strengthened in 1990 with the signing of a Presidential Decree. Based on this legislation, in addition to specific limitations relative to visitor numbers and the use of sunbeds and umbrellas, the following are mentioned:

In 1988, by Ministerial Rule two marine zones were established. These occupy a large proportion of Laganas Bay. Within zone A, no boats or fishing activity are allowed. Accordingly, in zone B the speed limit is 6 knots, while anchoring is not allowed. Fish farms are prohibited in both zones. In 1994, after sustained effort by ARCHELON and other environmental organizations a third zone was established, zone C, in which anchoring is allowed but the speed limit of 6 knots applies. Consequently, speed boats were almost completely prohibited from the Bay of Laganas. These marine zones are marked with buoys in order to be visible to boat users.

The uninhabited islet of Marathonissi is in the west of the Bay of Laganas. It has a small, 370m long beach made of pale thick sand on its north-west end. There are sand dunes on the back of the beach, which at some locations reach more than 50m inland. The steep hill behind the beach is covered by Mediterranean vegetation. The remains of an old monastery, belonging to the Church of Lithakia, is the only building on this islet. Tourists visit the beach during the day, on organised boat trips and by rented or private boats. Lights and noise from the residential areas of Laganas and Lithakia affect the beach during the night. Organized tours are allowed between 7:00am to 7:00pm from the 1st of May to the 31st of October. Visitors are only allowed to remain on the first 5m from the sea, as sea turtle nests are located on the back of the beach.

While most beaches within the Bay of Laganas mainly produce female hatchlings, the small beach on Marathonissi, with a mere length of 370 metres, produces mainly male sea turtles. This is caused by the slightly lower temperature of the beach sand on Marathonissi. The sex of sea turtle hatchlings is determined by the average temperature of the eggs during incubation. If the incubation temperature is above 29oC, the hatchlings will be females, while if it is below 29oC, they will be male. Indeed the pale colour of the sand on Marathonissi strongly reflects solar radiation, causing slightly lower sand temperature at the egg clutch depth. So while the beach of Marathonissi only receives 9% of the nests in Zakynthos, the fact they exclusively produce male turtles raises it to a crucial reproductive habitat for the survival of the Mediterranean loggerhead sea turtles.

East Laganas beach stretches eastwards from the last hotel of the developed part of Laganas (Louis Zante Beach Hotel), up to the Rock of Hipsolithos. East Laganas is characterised by fine sand mixed with small-sized pebbles and a landward extensive dune field. Visitors are allowed on the beach between 7:00am and 7:00pm from the 1st of May to the 31st of October.
Beach of Kalamaki 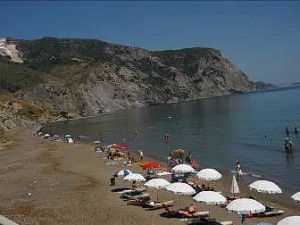 The beach of Kalamaki, with a length of 500m, is the eastward extension of the East Laganas beach, separated from it by the cliffs of Hipsolithos. Behind the beach there are low clay cliffs. A hotel has been constructed above the western part of the beach. The area has an easy access and it is visited by many people during the day. Visitors are allowed between 7:00am and 7:00pm from the 1st of May to the 31st of October. Visitors are only allowed to remain within a 5m distance from the sea, as sea turtle nests are located on the back of the beach.

According to legislation only 150 umbrellas and 300 sunbeds are allowed on the nesting beaches of E. Laganas and Kalamaki. These are to be removed every night. Despite this progress in legislation, problems with sunbeds and umbrellas still exist. 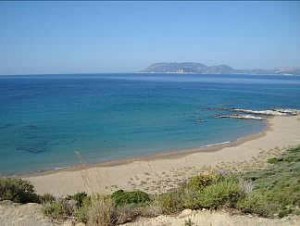 Sekania beach (650m) is the one that stands out for its natural beauty and the highest nesting density for loggerheads in the Mediterranean. Sekania supports well over 50% of the total number of nests made in the whole Bay. Due to its importance, ARCHELON has been urging the Government to expropriate or buy the private land behind the beach, in order to declare it a site of absolute protection. Finally in 1994, WWF Greece, following recommendations by ARCHELON, purchased a large part of the land behind the nesting beach. This was achieved with partial funding from the European Union and the support of the Greek Ministry of Environment. According to existing legislation public access is prohibited.
Daphni 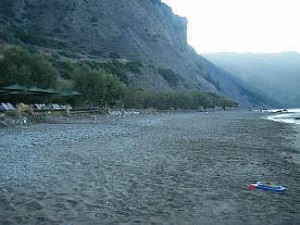 Daphni stands out as the beach with the most problems. All 15 illegal buildings constructed behind the beach of Daphni have not been removed. Following recommendations by the Council of Europe, the removal of illegal buildings at Daphni has been an obligation of the Greek Government since 1986, when only two prefabricated buildings existed. Unfortunately, nothing has been done so far towards this end on behalf of the state. Illegal embankments, street laying, planting of exotic species, and corrosion of the beach have destroyed the beach profile on many locations. Since 2006, the Management Agency of the Park came into agreement with the owners and imposed measures on the operation of the buildings and the beach management. Visitors are allowed from 7:00am to 7:00pm from the 1st of May to the 31st of October and must not exceed 100 at any one time. Visitors are only allowed within the first 5m from the sea, as sea turtle nests are located on the back of the beach.
Gerakas

Gerakas is a 15-30m wide beach, with fine and soft sand, and a length of 600m. The beach is backed by clay cliffs which shield off the lights of the two tavernas and the few houses that have been recently built further inland. A paved road comes very close to the beach and vehicles are parked there. There is only one access to the beach by a trail coming down through the cliffs. Due to its fair access, Gerakas attracts hundreds of visitors every day during the summer season. According to legislation only 60 umbrellas and 120 sunbeds are allowed at the western end of Gerakas, and the number of visitors on the beach at any one time should not exceed 350. Visitors are allowed from 7:00am to 7:00pm between the 1st of May and the 31st of October. They have to remain within the first 5m from the sea, as sea turtle nests are located on the back of the beach.
Turtle Spotting in the sea
Zakynthos has the privilege to host a very large number of sea turtles in the Bay of Laganas every summer. They migrate thousands of kilometres to reproduce within the bay. Turtle spotting by beach visitors and tour boats is a compatible ecotourism activity with positive prospectives, as it empowers public awareness about sea turtles and therefore their protection, as long as this experience takes place under certain conditions that primarily respect the sea turtles.

On every encounter with a sea turtle in the water, it is very important to seek the least possible disturbance of the animal (as in every other wildlife encounter). This can be achieved when turtle spotting fulfils at least some basic standards that guarantee the calmness of the sea turtle, such as:

However, sea turtle observation activities carried out in the Bay of Laganas do not always follow the above basic rules of sustainable observation, nor do they follow the regulations for this special area (e.g. the speed limit of 6 knots to avoid collision with a sea turtle), often placing the turtles in danger.

All visitors of the National Marine Park of Zakynthos should be fully informed about the existing regulations to ensure the well-being of this important sea turtle population concentrated in the Bay of Laganas. Because these regulations have been set to ensure the coexistence of humans and sea turtles to the benefit of both.