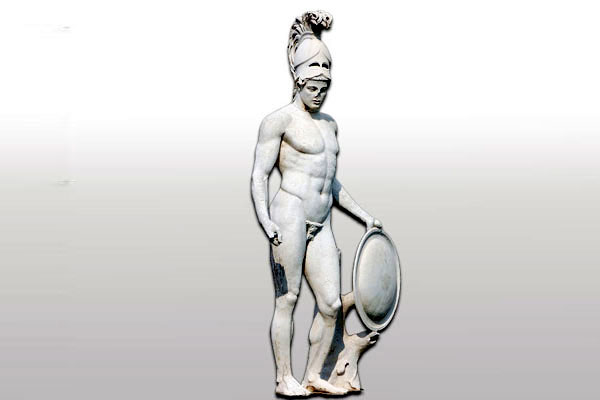 Ares is the Greek god of war. He’s one of the Twelve Olympians, and the son of Zeus and Hera. In myths, Mars appears bellicose and provocative and represents the impulsive nature of the war.
Thanks to his son Oenomaos from Steropi, Mars became ancestor of renowned people, such as of Atreus, Thyestes, Agamemnon, Menelaus, Aegisthus, Orestes, Electra, Pylades, Pittheus, Theseus, Hippolytus , Iphigenia, Demophon, Akamas, Eurystheus, Amphitryon, Alcmene, Iolaus, Hercules, Admetus, Kopreus, Alkathoos and Ajax of Telamon.
Ares usually appears in battle on foot, breaking the momentum of chariots and demolishing the walls. Other times he is on a chariot with two (Deimos and Phobos), or four magnificent horses (sons of Boreas and Fury) (Phobos, Aithonas, Flogios and Konavos, as Quintus Smyrnaeus calls them). 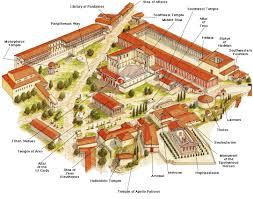 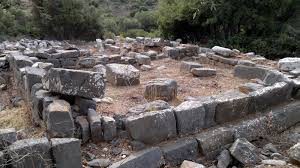 In a flat area near the present village Hellinika, between Agios Nikolaos and Elounda, in the border area of the ancient city-states Lato and Olous, there was a very old sanctuary dedicated to Aphrodite, the “Ancient Aphrodision” as mentioned in inscriptions of the 2nd c. B.C. The place took on new significance when conflicts between the two cities on border disputes escalated and approximately in the position of the dilapidated one-room geometrical temple, in 2nd century. B.C. the temple for two synnaoi deities [worshipped in the same temple], Mars and Venus was erected. The rectangular geometric era temple, measuring 4 x 9 m. was oriented to the west. In front of the facade was the trapezoidal altar, which probably was the center of a vestibule with five columns. According to the excavators the building was not used after the Geometric period and possibly at the end of the 2nd century. B.C. was already in ruins. To the west of the geometric period altar, the newer two-aisled temple was founded by the city of Lato, oriented to the east, with common nave for the two aisles, which was built later on top of the geometric period altar. For each of the houses there was separate entrance door from the common vestibule. The stone lintel of the eastern door of the south aisle, dedicated to Mars, is preserved, as seen from a discovered inscription that refers to construction work in the temple of Mars, and there was another access to it from the south wall of the building. From the inscriptions, the progress of construction projects and subsequent additions and repairs of the later temple are made obvious as well as the development of border disputes which were resolved, since assistance was required through arbitrations and setting of borderlines, by the Knossians, Romans and Miletians. The arbitrations and related conditions should also be placed in the “Dera sanctuary” or the temple of Mars in Dera area -and indeed many of them were found in the sanctuary of Lenika. Eventually the sanctuary and the region were attributed to Lato.