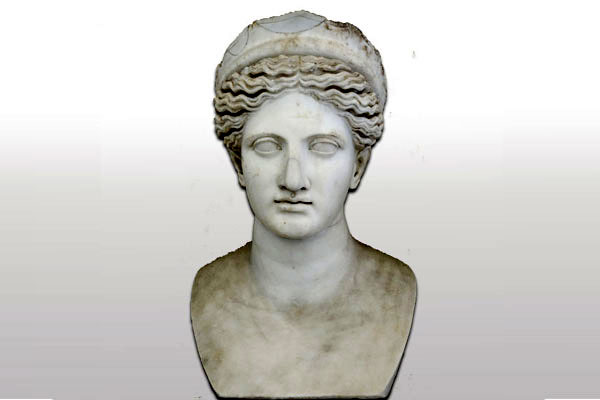 The so-praised, by the Orphic hymn, as «airy-formed» and “queen of all” goddess Hera, who became the “blessed consort” of Zeus, was the daughter of Kronos and Rhea. For Homer, she was raised by Oceanus and Tethys, while others believed that it was Temenos, the son of Pelasgos, who had raised her or the Horae. Being the goddess who was “mixed with venerable air”, she was born on many lands: Samos, Argos, Euboea and Arcadian Stymphalos.
The “Tonaia” festival was celebrated every year, in her honor, on the island of Samos. During the rituals, her cult statue was carried to the beach for purification and sweet offerings were placed in front of it. And, as the poet says, “she tosses and turns in the rushing wind and bathes in the waters”: this is the moment of her ritual annual purification bath. The participants to the rites wore wreathes of wicker and laurel. Other divine plants, with which the goddess was connected, were the pear tree –her cult statue, in her sanctuary of Argos, was made of pear wood- the helichrysum, the pomegranate and the lily. Her animal-symbol was the peacock.
For three hundred years, Hera was having a secret love affair with Zeus in a hidden place on mountain Kitheron, away from their parents. Zeus had sneaked in her hug, in the form of a cuckoo. The poet Kallimachus mentions Samos as the land of their first intercourse. For others, their marriage took place on the open ocean.

1. Temple of Hera in Olympia 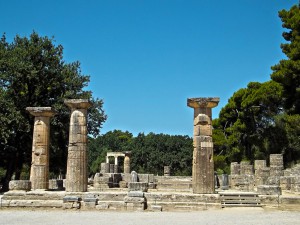 Today, the temple of Hera stands, gracefully, near the temple of Zeus, at the northwest corner of the sacred grove (“Altis”) of Olympia, below Kronion hill. The temple went under several slow constructive phases, through the years, ending up as a “museum” during the roman times: it was then, when important artifacts were stored or exhibited there, with Hermes of Praxiteles among them.
The temple had the form of a long structure, with a comparatively low height. Like most of the ancient Greek temples, it has an orientation E – W, with the façade on the eastern side. It is Doric in style, with a surrounding colonnade (six columns on the shorter sides and sixteen columns on the longer sides). The columns were originally made of wood which were replaced by stone ones, through the years. The result of this slow process was a variety of styles on both the columns and their capitals, according to the sculptor’s taste and, as such, the temple imprinted the evolution of the Doric style, from the archaic to the roman times. Painted pictures of the winners at the female “Heraia” athletic games were placed on the walls of the temple. The Heraia were women’s athletic games, in honor of the goddess.
Inside the main temple, in the so-called “sekos”, two cult statues were placed, depicting Hera sitted on a throne and Zeus standing next to her (Pausanias 5.17.1
The foundations of the temple, together with parts of the walls (“orthostates”) and the lower parts of the columns can be seen today. Four columns have been restored.
2. Temple of Hera in Mantineia of Arcadia 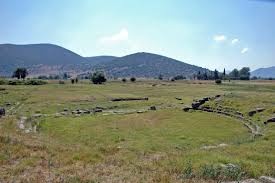 Mantineia was an important Arcadian ancient town, located in the middle of a valley, called “Mantiniki”. In the “agora” area of the ancient city of Mantineia and at a short distance from the ancient theater, there stand the foundations of the temple dedicated to Hera (Pausanias 8, 9, 3). It has a simple architectural form, belonging to the “distyle in antis” category: two columns between the antae of the façade, on the eastern side. Pausanias describes the cult statue of the goddess, inside the temple, as being sitted on a throne with her divine messenger Hebe and goddess Athena, next to her. 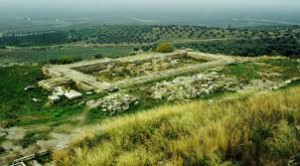 The Argive sanctuary, located between the cities of Argos and Mycenae, was the cult center of Hera “Argeia”, praised by Homer. It was founded in the middle of the 8th century BC. Here, the “Ekatomvaea” festival in honor of Hera, every four years, was mystic, during which the young men and women of Argos were initiated into the age of marriage. The rites started with the parade of the young people, from Argos to the sanctuary, ending with cheerful dances, after the initiation. Hundreds of faithful participants would follow, in order to honor the goddess and watch the rites. The sacrifice of 100 oxen (“ekatomvaea”) and the athletic games would take place together with the re-enactment of the “sacred marriage” of Hera and Zeus symbolized by the adornment of the sacred, bridal bed. The “Ekatomvaea” festival was held in the Heraion, until it was transferred to the town of Argos (3rd century BC) where it was celebrated together with the “Nemea” festival and was renamed “Heraia in Argos”.
Originally, a prehistorical deity, connected with the wholeness of Nature, was worshipped in the area, before she was identified with Hera, in later ages. The Heraion sanctuary is built on three terraces, on the southwestern slope of a hill, in the Argolis peninsula, offering excellent views towards the valley of Prosymna, below 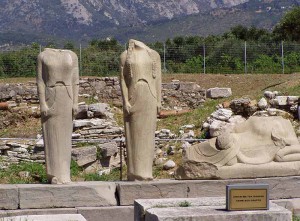 The cult of Hera on the island of Samos goes back to the 2nd millenium BC. Initially, at the very spot of the sanctuary, there was a small open-air, stone altar, with a temple-like shelter, next to it, housing the “xoanon” (cult image) of the goddess. Later, in the 8th century BC, the altar becomes monumental and the first temple of Hera is built next to it. This temple was followed by a bigger one (6th century BC) –a masterpiece of Ionic architecture- which was to be replaced by a “new” temple, built a few years later. Today, we can see the ruins of this 3rd temple, built when one of the seven sages of Antiquity ruled over the island, tyrant Polykrates of Samos. Herodotus has described it as “the largest temple, they had ever seen”. During the Hellenistic age, when the religious feeling gave space to more secular things, the sanctuary became the place of politicians’ self-presentations and political gatherings.
The finds of the excavations at the Heraion reflect the fame of the sanctuary which was worldwide: ancient visitors from all parts of the world (Egypt, Syria, Assyria, Babylon, Mesopotamia, Persia, Phoenicia, mainland of Greece, Crete, Cyprus) would visit the sanctuary bringing their exquisite offerings for the goddess.

5. Heraion of Perachora (near Loutraki of Corinth) 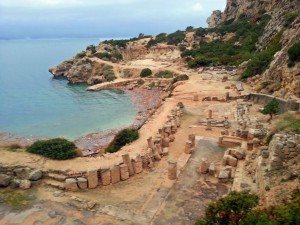 At a short distance from the town of “Korinthos”, just 15 kilometers northwest of the ancient city and at the tip of the Perachora peninsula, the remains of the Heraion sanctuary offer great views towards the Corinthian bay and the modern Corinth canal. Here, at the very site of the sanctuary of Hera, important traces of the early Corinthian civilization have been discovered, together with traces of the Corinthian rural open-air cult. It was here that Hera was worshipped with her two aspects, in two temples: as “akraia” (of the heights) with chthonian characteristics and as “limenia” (of the harbors and waters).
The excavations have reached the near-by lake of Vouliagmeni, where traces of the Neolithic era and the Mycenaean age have been revealed. Most probably, this was the greater area of the ancient city which was formed later and was called “Heraion”.
Here is the land where Medea buried her assassinated kids, after abandoning Corinth and also the land of an oracle of Hera, where a seer lived and offered his guidance to the visitors of the sanctuary (Strabo, 1st century AD). Actually, these two events explain the presence of chthonian elements in the cult of Hera “Akraia” here.

6. Temple of Hera on the island of Delos 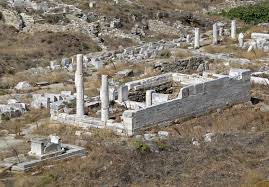 On the sacred island of Delos, on a far higher level than the central sanctuary of Apollo and right at the foot of mountain Kynthos, there stands the temple of Hera. The location of the temple can be explained with regards to its proximity with the temple of Zeus, on the top of Kynthos: the divine couple stands close to each other.
This Doric temple of Hera was built in the 5th century BC, over the ruins of an earlier temple of the beginning of the 7th century BC. Thus, excavations have brought to light archaic ceramics, bearing incised dedicatory inscriptions. The temple is “distyle in antis”, with two graceful Doric columns between antae at the façade which was on the southern side. The altar of the goddess stands just across the façade.

7. Temple of Hera in Mon Repo estate, at Corfu island 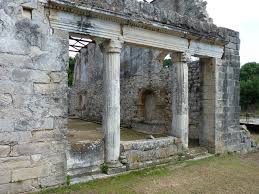 Very close to the modern city of Corfu (at a distance of 3 kilometers), the famous estate houses the “Mon Repos” villa. This neoclassical villa was built by the high commissioner Frederic Adams, in 1830 for his Corfiot wife. The whole estate occupies a part of the ancient city of Kerkyra (Corfu). Here, in the modern times, kings and queens enjoyed hospitality, like the empress of Austria-Hungary Elisabeth, widely known as Sissy and members of other royal dynasties. It was here that the Duke of Edinburg was born, the husband of the Queen of England, Elisabeth.
In the ancient times, there was a sanctuary here, where Hera was worshipped. The traces of her temple are located on the top of the low hill (called “Analepsis”), within the borders of the estate, today. It is an archaic temple, dedicated to Hera “Akraia” (of the heights). Some of its tiles and fragments are exhibited in the Mon Repos Museum. A classical temple (5th century BC) was built over the ruins of the earlier one, of which only a few traces of the foundations have survived.