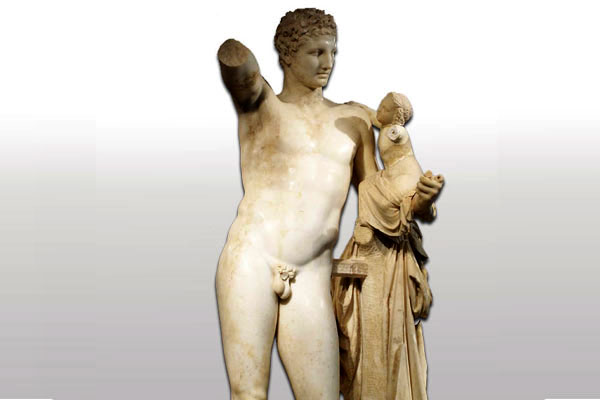 Hermes was born in a cave, on Kyllene Mountain (the so-called Zereia today) in the region of Corinthia. His parents were Zeus and the beautiful Pleiad Maia, daughter of Atlas. Being skillful and charismatic, from birth, baby Hermes invented the first lyre and managed to steal the oxen of Apollo.
Hermes became the most talented and multi-task god: messenger of the gods, an intercessor between mortals and the divine, patron of commerce, both of legal merchandise, the random find the so-called “hermaion” and the theft item, protector of sacrificial rites, guardian angel of the crossroads and boundaries, protector of the doors of the houses and the propylaea of the sanctuaries, patron of athletics and sports and, eventually, literature, poetry and oratory, since these were taught in the gymnasia. Hermes was primarily the “psychopombos”, the conductor of souls into the afterlife.
Hermes was the most cunning and philanthropist god, beloved and amusing: the perfect expression of the virtues and defects of the ancient Greek. The rapidness, the suppleness, the alterability and the illusive paths of mind are expressed through Hermes, in an archetypal way. His chthonian (of the earth) characteristics, as a conductor of souls, were of major significance. He does not only escort the souls, but participates in the jury of the underworld, practicing duties of a chthonian deity. Actually, he was the only one of the gods, who was moving freely between the worlds, the Olympian world, the mortals and Hades.
He is depicted with his golden, winged sandals and his winged hat (“petasos”), symbol of airy speed and holding his magical golden winged staff, the “kerykeion”. The British Academic Ronald Willetts says: “…Hermes is the most congenial, unsteady, confused, complex and therefore, the most Greek of all the Olympian gods”.
His divine hypostasis derives from the roadside heaps of stone-signs of roads or tombs. Ancient farmers would add an extra stone on top of such a heap, if they came across with one, believing that a “daemon” (divinity) was dwelling in it. They called the heaps of stone “herma” and the top-stone “hermes”. Through the years, these heaps of stone were transformed into the well-known hermaic stelae which functioned as road signs and boundary markers. The fallus on them is an archetypal fertility element of the divinity.
There are not many temples built for Hermes, since he was everywhere, in almost all human performances. They felt his presence in all sanctuaries at the sacrifices, in the agoras when conducting business, in the gymnasia where they studied or exercised, in their prayers at home or in the sanctuaries, in their dreams when the word of god’s mouth reached them and in their travels –the hundreds of hermaic stelae found everywhere indicate this.

1. Sanctuary of Hermes and Aphrodite at Kato Syme of Viannos region (Crete) 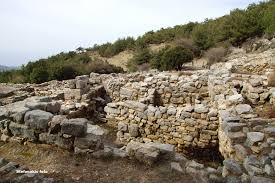 Kato Syme is a village, of Viannos region, in the south of Heraklion County. It is located in a green valley, rich in vegetation, surrounded by a wild, imposing environment, with the Libyan Sea at the far background where Blavopotamos River flows. Here, at the site of “Krya Vryse”, a very special sanctuary of Hermes and Aphrodite has been unearthed. The excavations in the sanctuary started in 1972 and continued, sporadically, until 2003, when they stopped.
The sanctuary was built on a height of 1.130 meters, on the southern slopes of Dikte Mountain, being the only cult site, in Greece, up to now, which operated continuously for 27 centuries, without interruptions. The natural spring, called “Krya Vryse”, by the sanctuary, still rich in water, must have been the primary factor of the establishment of the sanctuary, far away from any ancient residential center.
The sanctuary was established in 2000 BC, in order to become a center of an outdoor worship, par excellence, where sacrifices on the “pyre”, ritual meals and “spondee” would be offered. The architectural ruins represent 13 superimposed constructive phases, through the 27 centuries. Here, we have a smooth transition of civilizations, since the periodical destructions of the monuments happened due to natural causes and not due to hostile actions. The great fame of the sanctuary is testified by the many chambers which were constructed in order to offer hospitality to priests and crowds of pilgrims. The location of the sanctuary is identified with the “Hieron Horos” (sacred mountain), described by geographer Ptolemy who puts it between ancient Tsoutsoura and Ierapytna (Hierapetra of today).
During the 2nd millenium BC, which includes all the “anaktoric” periods of the Minoan Civilization, the sanctuary functioned with a dipole scheme: a built, sheltered structure and an open-air, architecturally constructed, area for the outdoor cult. The same dipole scheme characterizes the function of the sanctuary during the 1st millenium BC, as well. It is important to note, though, that in the geometric years (9th century BC) the new architectural form of the built altar appears in the sanctuary. The outdoor cult continues. A change takes place, in the Hellenistic years (end of 4th century BC), when the outdoor rituals are transferred to a built sheltered structure. This will be the status till the decline: till the end of the Palaio-Christian age, when the indoor cult continued in the small Christian churches (4th – 7th century AD).
The finds from the excavations indicate the character of the cult and the character of the worshipped deities, as well. Generally, the cult comprises of various rites, including animal sacrifices and ritual meals. The finds, though, differ between the 2nd and the 1st millenium and represent the way that the faithful of the two millenniums perceived the divine. From the Minoan years (2nd millenium BC), anonymous ritual vessels, uniform male figurines of worshippers, absence of female figurines, give us no clue of the worshipped deity and lead to the assumption that purification rituals and spondees would be offered by crowds of Minoan male (only?) pilgrims, congregated at the sanctuary. The picture changes in the 1st millenium BC, when the Minoan ritual vessels disappear and many diverse figurines, of both sexes, appear. Additionally, many metal dedications are discovered that lead to the assumption of initiative purification rituals, connected with the dedicators’ transition from puberty to adulthood. The inscriptions (6th century BC – 2nd century AD) lead us to Hermes “kedrites”, as protector of the customs of adulthood, who was worshipped, here, together with Aphrodite. From the inscriptions we know that young people, from many parts of central and eastern Crete, were gathered in the sanctuary, together with many archons who supervised the event.
In conclusion, the focal point of the cult, in the 1st millenium BC, was an outdoor altar with a layer of pyre and bones, around it. In the ashes, most of the cult items were found and, among them, clay figurines of a naked goddess and representations of Hermes “kedrites”. Inscribed tiles bearing the dedicators’ names were found, as well. The terraces, on the slopes of the mountain, were used by the pilgrims during the festivities. Not far from the altar, a small, late Hellenistic temple, almost intact, has been found and many clay figurines, including a roman inscription which mentions Hermes and a Nikanor, son of Theomnastos.
Without doubt the sanctuary of Hermes and Aphrodite was an extra muri sanctuary, with a great fame and with the funds to be self-sustainable, perhaps supervised by the most powerful city-state of Doric Crete, each time. 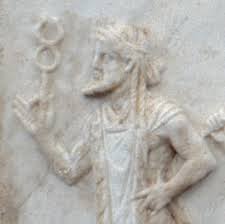 A paved asymmetric square known as the Agora of the “Hermaists” or “Competaliasts” begins, immediately after the modern quay of Delos. In the Hellenistic years (3rd – 2nd century BC), Italians began settling on the sacred island. Most of them were bankers and merchants from South Italy and Sicily. They were organized in various professional societies, each under the patronage of a god who is indicated by the name of the society.
This square was to become the center of such activities, in the 1st century BC. The Society of the Competaliasts made its appearance in the square that now bears its name. Its members were largely free men, ex slaves and slaves, under the protection of Lares Compitales, the gods of the crossroads, a roman alternative for Greek Hermes.
The square was paved with big granite slabs, many of which bear holes for the placement of poles to support shelters. It was surrounded by shops, small temples, dedicated to Hermes and altars.
Definitely, other societies would be served here as well, i.e. the Hermaists under the protection of god Hermes.
West of the agora was the ancient port. Its northern side was bordered by the Stoa of Philip and a small ionic temple, dedicated to Hermes. On the eastern and southern sides, chains of shops and workshops operated and served those professional societies. The foundations of a square and a circular building, both dedicated to Hermes and bases (exedrae) for the statues-dedications of bankers, captains and merchants, all stand in the center of the square.