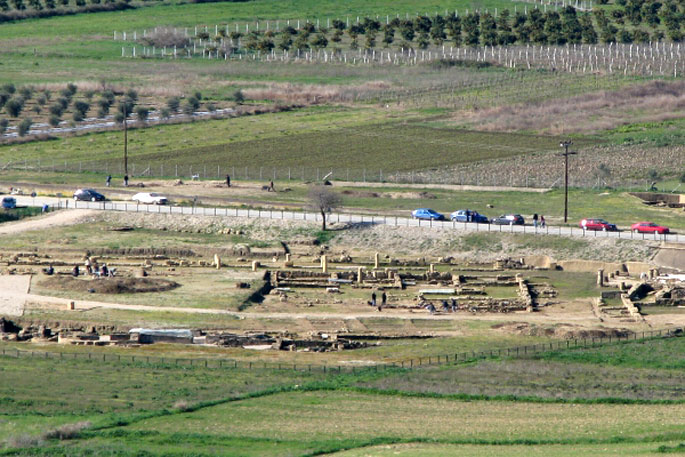 Ilida or Ilis was a city-state in ancient Ilia, very near ancient Olympia, and took up the area which today extends from the village of Paliopoli (or Nea Ilida) to the southeast, Bouchioti (or Avgeio) to the southwest and Kalyvia to the west. According to myth, it was founded by Oxylus, son of Aemon and Gorgi, who is also mentioned in some traditions as the founder of the Olympic Games. Oxylus, who hailed from Aetolia, founded Ilida by merging all pre-existing towns in the area, and became its first king.

Ilida placed a lot of emphasis on the organization of the Olympic Games, which took place every four years. Before and during the games the whole area came alive; a month before the games began, all athletes were to come to Ilida to train. Many came with their friends and family, from various parts of the country.

Ilida was one of the most important Greek cities in antiquity. It was inhabited in prehistoric times and during the Mycenaean period it became an independent kingdom, which prospered greatly in the 6th century B.C. and also had its own coins, which were distinguished for their artistic merit. During its great prime, Ilida comprised four districts: Pisatis, Trifylia, Akroreia and Koile-Ilis, the fertile valley over which the kingdom extended. The locals became stock-breeders and farmers, taking advantage of the valley’s rich soil and the area’s mild climate. They also occupied themselves with the Olympic Games, contributing greatly to their organization.In the society of Ilida the women played an important role, having assumed the management of public affairs, as well as the organization of the Heraia, panhellenic women’s games in honour of Hera. The games took place every four years.

The buildings
The city had many buildings; according to Pausanias, who visited it during his travels, it had an arena, gymnasium, many temples, sanctuaries, shrines and arcades, all adorned with beautiful art works. The sanctuary of Tyche, the sanctuary of Dionysus with the god’s statue, made by Praxiteles, the sanctuary of the Charites with their wooden statues, the sanctuary of Apollo Akesios, who was worshipped as a healer, with his statue, the temple of Seilinos, the temple of Athena with her ivory and gold statue, which depicted her as Ergani, wearing a helmet with a rooster, the temple of Aphrodite Ourania with her ivory and gold statue, made by Phidias, the temple of Sosipolis, whom the locals regarded as the personification of Zeus, also a temple of Hades, of Artemis Philomeirax, of the Roman emperors, as well as the shrines to Hades and Aphrodite Pandemos. Apart from the worship buildings, there was also a gymnasium, an arena, baths and a theatre. The theatre was built in the 4th century and did not have seat rows; the spectators sat on the incline of the koilon. During Hellenistic and Roman times it went through many alterations. Some time later it was abandoned and its expanse was used as a cemetery.

The decline
The great prosperity of Ilida slowly started to fade in the 4th century B.C. In 146 B.C. the city was conquered by the Romans. During that time it became a proper Roman province, sprawling with villas and baths, many of which were built above the older, classic buildings. The final end came when the emperor Theodosios A’ banned the Olympic Games in 393 B.C., something which proved detrimental to the city, as the games were a great source of its prosperity. The destructive earthquake of the 6th century A.D. extinguished any hopes of recovery.

The excavations
The city was first located by travellers in the 19th century, since its ruins were still visible. The first organized excavations took place between 1911 and 1914 by the Austrian Archaeological Institute, led by the archaeologist Otto Walter. Today the Archaeological Society resumes the excavations from time to time, and also some rescue excavations are carried out by the 7th Ephorate of Prehistoric and Classical Antiquities. So far, more that 120 settlements have come to light, and more than 200 sites have been located.

Fairly recently, at Lakkathela, in the region of Daphne, a Mycenaean cemetery came to light, where 12 rich tholos tombs were excavated, which showed to be intact and contained rich burial offerings. The area was proclaimed an archaeological site and it may be that it has more to reveal in the future.

Everything the excavations brought to light has been assembled since 1981 in one collection, the Archaeological Collection of Ilida, which includes findings ranging from the Early-Helladic to the Roman period, including jars, figurines, statues, weapons, tomb stelae and many more. Of great importance is the mosaic floor of a 3d century A.D. mansion, with depictions of the nine Muses and the labours of Hercules.