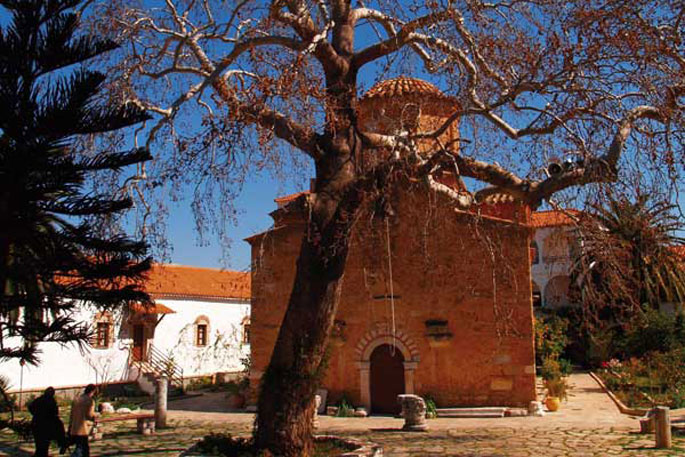 The Mansion of Herod Atticus is one of the most important and most impressive monuments in Arcadia. It is situated in Eva, in Doliana, an ancient town of Kynouria, which has been completely lost, but for a few samples of habitation. The mansion’s location was already known from the 19th century, however it was identified with certainty in 1906 by archaeologist Constantine Romeos. 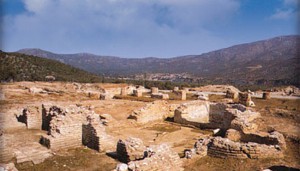 Herod Atticus, orator, philosopher and politician from a wealthy family, was also a fanatical collector of works of art. From his father he inherited a small mansion in Eva, which he decided to expand and to house his vast collection there, turning it into a sort of luxury museum. The mansion takes up approximately 20,000 m2 and includes a villa, a sanctuary, baths and a large atrium with galleries. The most impressive of all, however, are the mosaic floors; the total expanse of those discovered so far exceeds 1,300 m2. As the excavations and the research continue, it is very possible that others will come to light as well.

Unfortunately, before the regular excavations, a great part of the mansion’s treasures was destroyed due to ignorance, a fate which has befallen a great percentage of our cultural heritage.

Herodes Atticus (103-179 AD) was one of the most significant personalities of the Roman era in Greece. He was born into a rich family, which gave him the freedom to cultivate a multitude of interests and talents: he became an orator, philosopher and politician, while at the same time a prominent art collector, creating one of the most admirable collections of his time with rare and noteworthy works. From his father, Atticus, he inherited a small villa in Eva, Doliana, an ancient city of Kynouria situated close to the Loukous Monastery. Only few remnants of this city survive today. When Herodes completed his studies in Rome and Athens, he moved into this villa, impressed by the region’s rich history. It was the right place to house his rich collection, creating in this way a type of museum for ancient art, which was quite impressive in terms of its quality.

The location of the villa was known back in the 19th century, when English traveller William Martin Leake pointed it out. In the middle of the century, the area was visited by Ernst Gurtius, who noted that the ruins did not belong to some settlement, but to a villa. Archaeological findings were already bountiful in the area; according to the testimony of the monks of the adjacent Loukous Monastery, they would continually uncover antiquities while cultivating their land. The villa was identified in 1906 by Konstantinos Romaios, while systematic excavations started in 1979 by Theodoros Spyropoulos and continue to this day. The findings that have come to light are kept at the Archaeological Museums of Tripoli and Astros.

The Villa of Herodes Atticus covered a large area of 20,000 square metres, the largest villa in the Greek territory, following the Roman architecture style. It included a mansion, an atrium with galleries, a bath complex and a sanctuary. The archaeological findings that have come to light in fact verify the stories that this villa was a true museum. A number of sculptures, inscriptions and architectural parts have been revealed, most impressive of all, however, being the mosaic floors in various areas of the villa, with decoration, scenes and colours of high art. Currently, a large part of these mosaics has been uncovered, and future excavations are anticipated to reveal much more.

The villa unfortunately sustained repeated damage over the centuries, either owing to natural factors, or to raids and barbaric attacks, or even worse, to human indifference. The period of systematic excavations thankfully put an end to the lawless activities taking place in the region. Now it only remains for the villa to reveal its untold treasures lying hidden deep inside the earth.