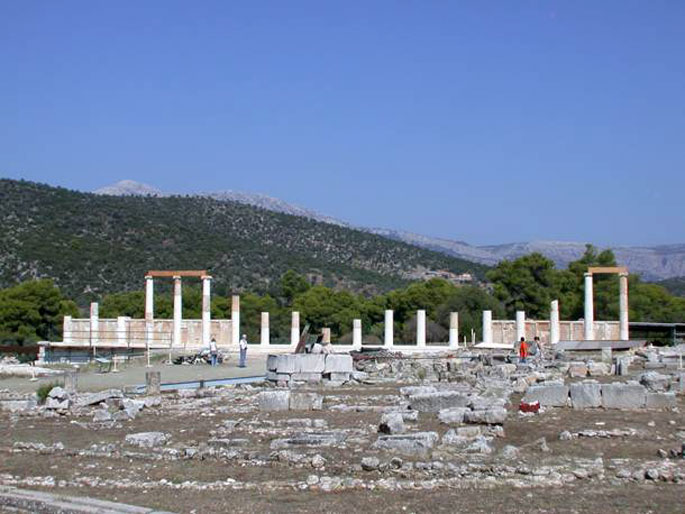 The ancient theater of Epidaurus is located in this archaeological site. The Sanctuary of Asclepius is located between the hills Titthio and Kynortio which were named after a nursing goat and a guardian dog that saved little Asclepius from hunger and beasts. 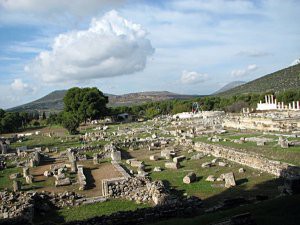 The sanctuary enjoyed great fame and was considered of the most important healing center of the time. It was the birthplace of medicine that was believed to be given to the people as knowledge from the god and it spread to the 300 Asklepeia in the Hellenic and the Roman world.

The adoration of medicine in this region did not start from Asclepius. Centuries before, between the 16th and 11th century B.C. on mount Kynortion behind the ancient theater there used to be an unusually large sanctuary dedicated to a healing goddess. At the same mount, in 800 B.C, according to the mythology, the king of Epidaurus, Malos, founded a sanctuary dedicated to Apollo Maleatas and later his granddaughter, Koronis, daughter of the king of Thessaly, Flegyas, gave birth to Asclepius, a fruit of her love with Apollo. During the 6th century B.C. the fame of Asclepius spread beyond the limits of Argolida and a second sanctuary was founded, one kilometer southwest, the Asklepion. 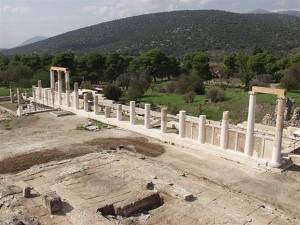 The ritual of healing gave great importance to the purifying significance of the water. In the following centuries, the sanctuary became very famous, and the worship continued, despite the destructions during the Roman period, until the official ban on ancient pagan religions in 426 A.D. by Theodosius the Great. Between 522 and 551 A.D. the site was abandoned following the destructive earthquakes.

Panagis Kavvadias excavated the site in 1881, uncovering the sanctuary’s most important monuments.

Several buildings surround the temple. These include the Archaeological Museum, the Hostel, the Purifying Baths, and then the gymnasium and a Roman Odeon built in its yard. In the northeast part one can see the so-called Stoa of Kotyos, the temple of Artemis and the doric temple of Asclepius. Next to the temple lies the Abaton, where the patients’ hypnosis took place, the Tholos, a circular peristyle building, the Roman baths, a sacred road that lead to the Propylaia and the ruins of an early orthodox church. Also visible are the remains of the arena and the stadium. The most significant monument of the site is the well renowned Ancient Theater of Epidaurus, an architectural masterpiece.