One of the most important archaeological sites in Greece, Eleusis graphically displays the vast history of this residential area. Inhabited since the Middle Helladic era, it is renowned for the Eleusinian Mysteries, and Aeschylus, greatest of the tragic poets. As far back in time as ancient Mycenae, the destiny of Eleusis has been linked to Athens. 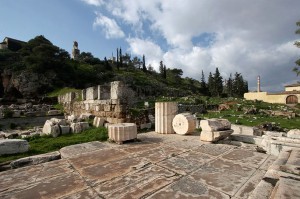 A number of major monuments occupy this site, including: The Sacred Yard, the ancient area of gathering of the believers, and the outmost destination of the Sacred Road; the Great Propylaea, its Doric order entrance, a replication of the Mnisseclean Propylaea of the Acropolis in Athens; the Small Propylaea, displaying an Ionic order entrance; the Telesterion, site of the Palace and worship of adytum; the Triumphant Arches, Roman copies of the Arch of Hadrian in Athens; the Kallichoron Well, where, according to myth, Demeter sat during her quest for Persephone; the Ploutonion, a sacred cave with an entrance to Hades; and the Mycenaean manor, a rectangular Mycenaean temple.

Page: 1
Older Entry The Theatre at Thoricus
Newer Entry Sounion, the Temples of Poseidon and Athena