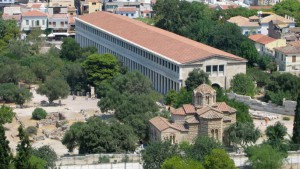 Situated to the north-west of the Acropolis, the ancient Agora of Athens was originally established as the administrative and trade center of the city, thus its name, the Agora, the “trade marketplace.” Deep in antiquity, the agora witnessed the procession of Panathinaia, the greatest celebration in the ancient city of Athens, one memorializing the unification of all of Attica under King Theseus.

Inhabited since the pre-historic era, the Agora had become the city center by the 6th Century B.C., and was home to a plethora of secular and sacred social activities, practiced in a multitude of public buildings, many of which still stand in ruins today. Throughout its turbulent history, the Agora survivied multiple sacks, suffering its most serious damage from the Persians in 480 B.C., the Romans under Syllas in 86 B.C., and the Heruli in 267 A.C. Finally abandoned in the 6th century, the area was dug under, eventually being covered over by houses and churches. The ruins of the ancient Agora remained buried and forgotten for fourteen-hundred years, until extensive excavations in the 19th and 20th centuries revealed its archaeological treasures.