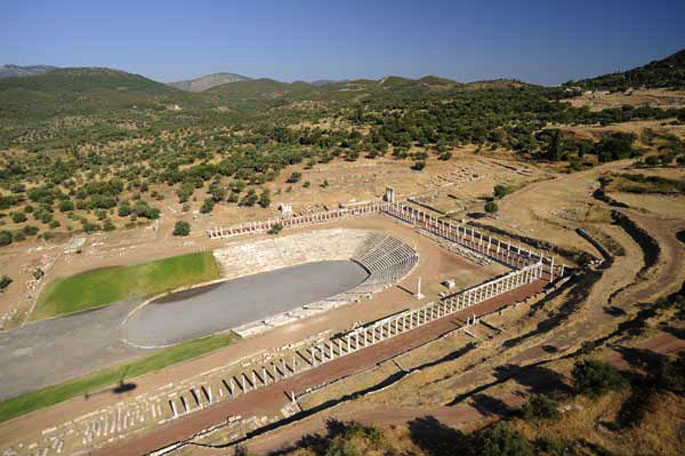 Ancient Messene is situated in the western foothills of mountain Ithomi, near the village called today Mavromati. A large part of the city has come to light, which reveals its great expanse and also its significance during ancient times. Ancient Messene was built in 369 B.C. by the general Epaminondas from Thebes after the battle at Lefktra, when he defeated the Spartans, invaded Laconia and released the Messenians from the Spartan rule. 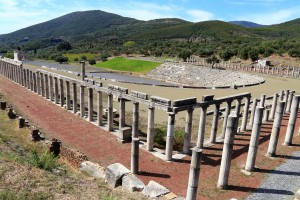 The traveller Pausanias visited the city between 155 and 160 B.C. and recorded significant information regarding its form and all public and holy buildings. First of all the stone wall that enclosed it, which was approximately nine kilometres long and protected the city from all directions, apart from the northeast, where Ithomi stood as a natural fort. Apart from part of this wall, the archaeological excavations also brought to light: the Theatre, which mainly hosted political assemblies, the Arsinoe Fountain, a large and impressive construction between the Theatre and the Agora, the western part of the Agora, the sanctuary of Zeus Soter, the sanctuary of Demeter and the Dioscouri, the Asclepium, which seemed to play an important role in the public life of the city, the sanctuary of a hero, probably Aristomenes, the Ecclesiasterion, the Stadium, the Gymnasium, as well as the Arcadian Gate, great in size, which is mentioned many times by the travellers as one of the archaeological site’s most impressive constructions.

To the south west of Peloponnesus, next to the modern-day village of Mavromati, in ancient times lay the city of Messene, one of the most important ancient cities of the region, with a significant historical presence. The city was founded in 369 BC by the Theban general Epameinondas and his allies from Argos, with the purpose of excluding the Spartans from the Messenian region.

Legend has it that the specific location for the establishment of the new city was selected after the location of the will of Aristomenes, a Messenian hero, was miraculously revealed through the intervention of priests and oracles. According to Pausanias, in order to populate the new city, Messenian immigrants in Italy, Sicily, Evesperides in Libya, as well as various other cities where they had settled, were called back. Most of them replied positively to the invitation to settle the new city, and together with the freed slaves and the perioeci (the free but non-citizens of Sparta), they comprised the first population of Messene. The city got its name from the legendary, pre-Doric queen of the land, who was the daughter of King Triopas of Argos and wife of Polycaon of Laconia. According to Pausanias, Messene was deified circa 10th century BC and was gradually declared one of the main deities of the city.

Systematic excavations started in 1895 by Themistocles Sofoulis and were continued in 1909 and 1925 by Georgios Oikonomou. Anastasios Orlandos later researched the area until 1974, while from 1986 the excavations are directed by Petros Themelis. Throughout these years, many public and sacred buildings were brought to light, as seen and described by Pausanias, who visited the city in years 155-160 AD, during the reign of Emperor Antoninus Pius. 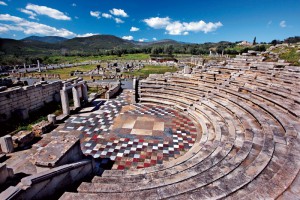 Ancient Messene was surrounded by a nine and a half kilometre wall, its largest part still standing to this day. It had two gates, the Arcadian Gate (or Gate of Megalopolis) and the Laconian Gate. This last gate was destroyed in the 18th century, but the Arcadian Gate is still preserved in fairly good condition, and in fact was the city’s landmark for the first travellers, who liked to depict it in their engravings. It is an enormous and imposing circular gate, with two entrances, one interior and one exterior.More discoveries were made in ancient Messene, such as the theatre, the agora, the temples of Demeter, the Dioskouroi, Zeus Sotiros, as well as of Isis and Serapis; the temple of a hero, the imposing Spring of Arsinoe, a large Doric temple, the Asclepeion, which was the most magnificent public building; the ecclesiasterion, which is a type of small theatre, the stadium, the gymnasium, and from later times a basilica of the early Byzantine era.

The city’s layout followed the hippodamian system, where all buildings have the same orientation and space is divided along horizontal and vertical axes. Hippodamus of Miletus was the father of this system. He was an architect, mathematician, urban planner and astronomer who lived circa 5th century BC, and he based his system on the three principles of democracy: isonomy (equality before the law), isopolity (equal civic rights) and isomoiria (equal share in land ownership).

The city fell victim to a raid by the Goths in 395 BC, led by Alarichus, and after that it gradually became deserted. It is however still one of the best preserved cities of the ancient world and one of the most interesting archaeological destinations.

Page: 1
Older Entry The Palace of Nestor
Newer Entry “The Routes of the Olive Tree” – Messinia