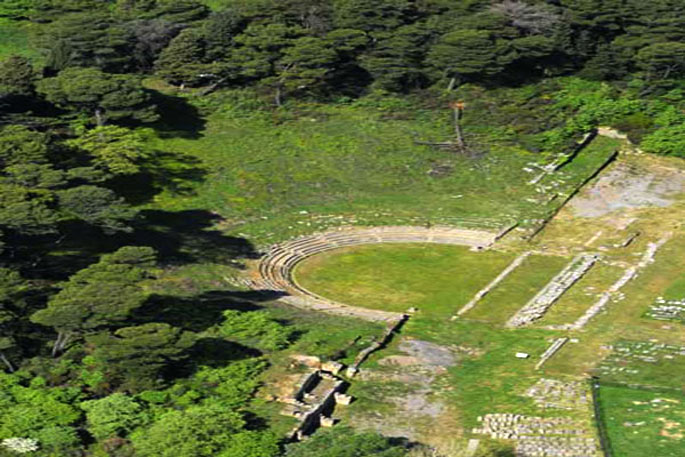 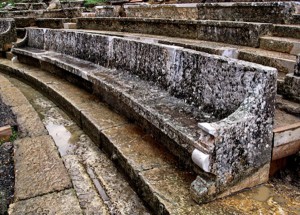 Three kilometres outside modern-day Megalopoli, in close proximity to the road leading from Megalopoli to Karytaina, lies the archaeological site of Megali Polis, one of the most magnificent cities of ancient Arcadia which, despite this, did not manage to survive for more than two centuries. The archaeological site contains ruins of the ancient agora, the Thersileion parliament hall on the north side, with a capacity of approximately 16,000, as well as the largest and oldest theatre of Ancient Greece, situated across from the agora and connected to it by a bridge. 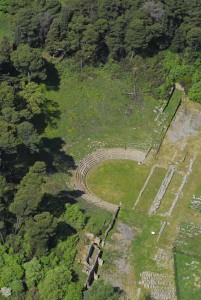 The theatre was constructed by Polycleitus of Argos, circa 370 BC, and had a capacity of around 20,000 spectators and perfect acoustics. The reason its proportions were so large was that, in addition to theatre, it also hosted meetings of a political nature between the 40 Arcadian cities that comprised Megalopolis, which could be attended by any interested citizen. A wooden stage with wheels was used for plays, which was kept at the scenotheque (the stage store) and would be pulled out to the theatre whenever needed. The theatre’s peak is placed in the 3rd century BC, and coincides with the peak period of Megali Polis. The theatre first started to come to light in the late 19th century. The British Institute started excavations in the region in 1890-1891, which revealed the proscenium, orchestra, part of the proedria, the analemma walls of the parodoi, the foundations of the scenotheque and the lower stone seats. Research is still underway at the Thersileion parliament hall site, and new results are expected. The ancient theatre of Megalopolis is part of a European programme financed by UNESCO. The goal is to carry out the necessary restoration works that will further highlight the importance of this ancient monument.