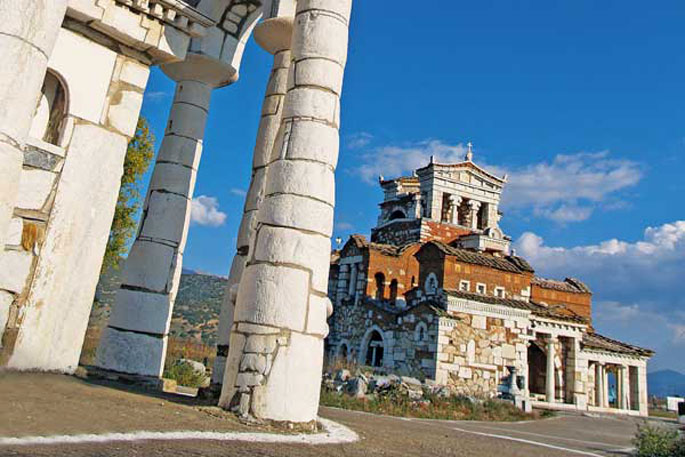 Mantineia was one of the largest and most significant cities in antiquity and it became an important centre of historical developments not only in the area of Arcadia, where it belonged, but in the whole of Greece. The ancient city is located 14 kilometres from Tripoli, in the area called Paleopoli. The first excavations began at the end of the 19th century and around 1960 other parts of the city came to light. 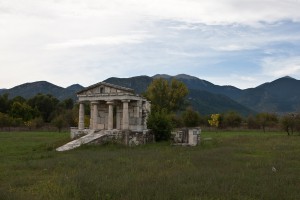 The most important monuments that the visitor to the archaeological site of Mantineia can see are the ancient theatre, the Bouleftirion, parts of the ancient Agora, Roman baths and a temple which was dedicated to Artemis Mesopolitis. Across the archaeological site one can also visit the Christian church of Aghia Fotini, a combination of Byzantine and Greek architecture, the aesthetics of which are a source of conflicting opinions.

Regarding the preserved monuments, our best source of information is the traveller Pausanias, who visited the city around 170 A.D. and refers to them in detail. The archaeological site begins from the hill Gortsouli, where the acropolis of ancient Mantineia was located. From the top of this hill the visitor has a great, panoramic view of the whole valley of Mantineia, with the remains of the ancient city. 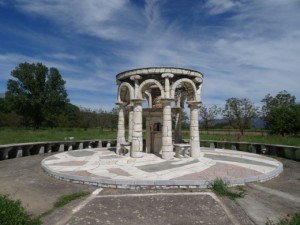 The ancient city of Mantineia is situated approximately 14 kilometres north of Tripoli, at Palaiopoli, one of the largest, most important and best preserved cities of the ancient world. Pausanias reports that Mantineas was the city’s legendary settler, grandson of Pelasgus, primogenitor of the Arcadians. The city is also mentioned by Homer, who calls it Mantinei eratinei, meaning “beloved land”. As this ancient reference reveals, Mantineia was a city already at its peak during the Archaic period, playing an important role in the events, not only of Arcadia, but of the entire ancient world.

The first excavations in the region started between 1887 and 1889 by the French Archaeological School, led by Gustave Fougères, and they brought to light the Ancient Agora. Later excavations were undertaken in 1960 by the Greek Archaeological Service and revealed even more relics of this glorious city. The testimony of traveller Pausanias, who visited the city around 170 AD, helped in the identification of these discoveries as the main temples and public buildings of the city.

Mantineia had an impressive fortification wall, the agora, a theatre from the early Hellenistic times, a bath complex dating to the Roman period, the bouleuterion, a temple of Artemis Mesopolitis, as well as two temples which were possibly related to the worship of Zeus and Hera. Residences and tombs have also been located, but they are still well protected underground. Close to the archaeological site lies the Christian church of Saint Foteini, which combines Byzantine and Greek architecture. North of the ancient city, at a distance of approximately one kilometre, is the hill of Gortsouli, which has been identified as the administrative centre of the ancient city, known in ancient texts as Ptolis. A temple was discovered on this hill, which marks the beginning of the archaeological site.

Mantineia had significant presence and power in ancient times, also owing to its strategic position. Its perpetual competitor was Sparta; both cities claiming control of the wider region. This competition resulted in the city’s first destruction in 385 BC, by Agesipolis, King of Sparta. The residents then abandoned their destroyed homeland and scattered into the surrounding areas until 370 BC, when the city was re-established by the Theban general, Epameinondas. In 223 BC the city was destroyed once again by the Macedonian king Antigonos C who, together with his Achaean allies, conquered and looted the city, and massacred its population. The city was again rebuilt in 221 BC under a different name: it was named Antigonia, from the Macedonian king. It kept this name for some centuries, before the Emperor Hadrian gave it back its original name.