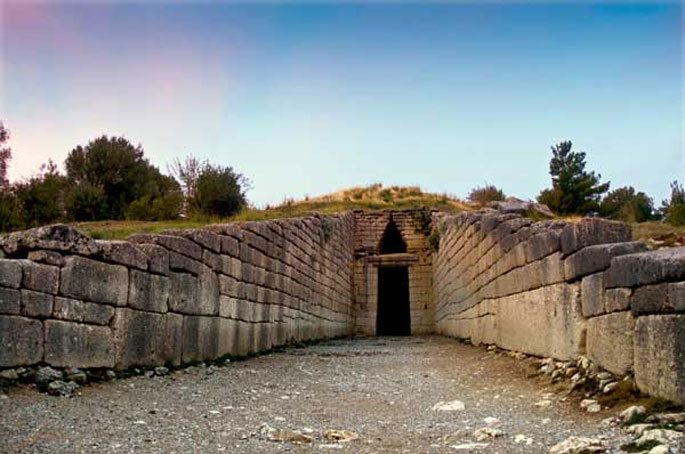 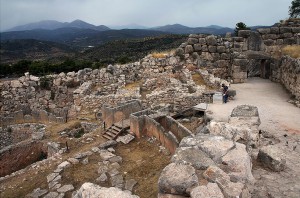 Mycenae, Homer’s Rich in Gold town, is located between two conical hills. According to the tradition it was founded by Perseas whose dynasty lasted three generations. After them, Mycenae was reined by the family of Atreus and it was during their rule that most of the monuments were built. Their decline started in the 12th century. The town was then occupied by the Dorians and after them it was conquered by Argos (468 B.C.). By the 2nd century B.C. Mycenae was ruined. The visitors will admire the “Lion Gate”, the “cyclopean walls”, the Atreus Palace” the Grave Circles A and B, the famous “Treasure of Atreus”, the “tholos tomb of Clytaemnestra” and many other constructions which will transfer visitors to mythical and glorious days.

The Rich in Gold Acropolis of Mycenae is located in a strategic position, 10km outside the town of Argos, on the old national road to Corinth, burried in a rocky mountain barrow between two conical hills, Profitis Ilias and Sara.

Perseus, son of Zeus and Danai, daughter of Akrisios, king of Argos and descendant of Danaos, is traditionally considered as its mythical founder. The dynasty of Persides was followed by Electrion, Sthenelon, son of Perseus and then by Eurystheas who was killed in an expedition. The place was then occupied by Atreus and Thiestis, descendents of Pelops. It was here that Agamemnon, son of Atreus, gathered all the Greeks that sacked Troy and spread the fame of Mycenae all over the world. Many tragic poets were inspired by the glory and the drama of this generation. The glory of Mycenae lasted until 1100 B.C. when the Dorians occupied Peloponnesus. The destruction continued in the subsequent centuries and in 468 B.C. Argos conquered the acropolis. In 150 B.C. the town was probably fully abandoned.

For many centuries this glorious land existed only in the imagination of poetry lovers. In 1876 Heinrich Schliemann, consulting the Homeric poems, began excavating and uncovered the palaces of Atreides and the brilliant Mycenaean civilization that dominated during 1600-1100B.C. Most of the monuments discovered belong to the Late Bronze Age between 1350-1200 B.C. However the site was first occupied in the Mesolithic period. 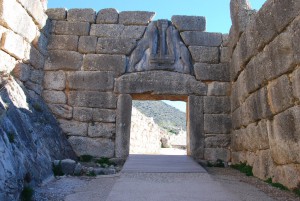 At present the site hosts many impressive constructions. The visitors can follow the steps of Atreus and admire the “Lion Gate”, where two rampant lions are carved in stone relief, surrounded by the imposing “cyclopean walls”. At the main site one can see the well preserved royal courtyard, the main palace of Atreus and a series of constructions- probably private houses. The archeological findings at the site suggest a close relation between the Minoan and the Mycenaean art. Frescos and mosaic decorations belong to the Cretan Minoan artifacts. In a few meters further one can visit the remains of the Grave Circle A and outside the walls, to the west of the Lion Gate, the Grave Circle B with its 24 tombs, 14 of which are royal. 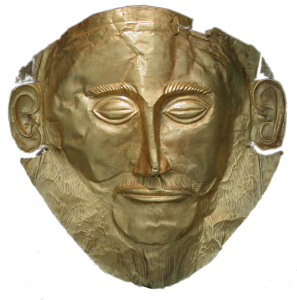 The underground cistern and the North Gate are of a great importance, too. The Treasury of Atreus is located at the site where golden objects were found, as well as the famous mask of Atreus. In a small distance lies the sevre Grave of Clytemnistra and the Grave of Aigisthos.

All of these monuments along with many other constructions make up the sights in the place where Homer’s greatest of men used to walk. 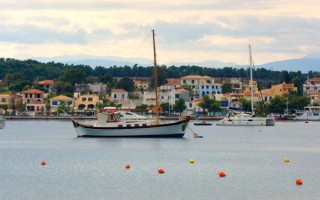 Festival of Art and Culture in Porto...