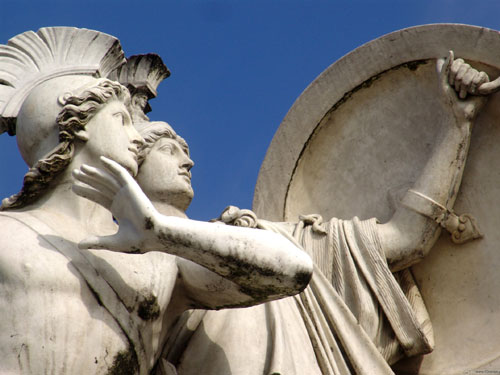 In “Alexander the Great” by Ulrich Wickens is stated that “in order to understand the Greeks we must get into the specificity of their nature” and as Jacob Burckhardt once said, “the myth is the virtual foundation of their entire being”.
It was usual for the Greeks, even in cold political cases, to refer to mythological incidents or to form the myths in accordance to the interests of their present as well to project their present situations to the mythical times in order to gain more power. Even in the life of Alexander the Great that was what played leading role.
(M.P. Nilsson, Cults, Myths, Oracles and Politics in Ancient Greece)

The initial, the archaic form of the myths has been lost therefore the portion that has been preserved today and can be presented, has ended being extremely compact. In Ovid we discover that the archaic spirit has been adulterated because of the “refining” process
– Karl Kerenyi, Die Mythologie der Griechen, 1966 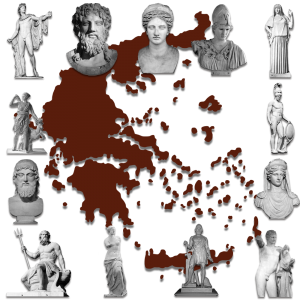 Apollo is the eternal golden-haired divine “ephebos” (adolescent), master of the oracles, god of light and music. He is the “paeeon” (healer) who would heal gods and goddesses with his magic touch and powerful light. His cult was divided into his two main aspects: the oracular-therapeutic and the solar-illuminated,... read more

Ares is the Greek god of war. He's one of the Twelve Olympians, and the son of Zeus and Hera. In myths, Mars appears bellicose and provocative and represents the impulsive nature of the war. Thanks to his son Oenomaos from Steropi, Mars became ancestor of renowned people, such as of Atreus, Thyestes,... read more

Artemis was Leto’s maidenly and wild daughter, Zeus’ untamed offspring and Apollo’s twin sister. She was the queen of mountains and woods, goddess of hunting, protectress of birth and mistress of the beasts. As a “Nykterophoitos” (wanderer of the night) and torch-bearer goddess, she would rush,... read more

Hermes was born in a cave, on Kyllene Mountain (the so-called Zereia today) in the region of Corinthia. His parents were Zeus and the beautiful Pleiad Maia, daughter of Atlas. Being skillful and charismatic, from birth, baby Hermes invented the first lyre and managed to steal the oxen of Apollo. Hermes... read more

Demeter, the “universal mother” of the hymns, the “blessed” and “divine”, was one of the greatest goddesses of the ancient Greek pantheon. She was the granddaughter of Gaia, the daughter of Kronos and Rhea and the sister of Zeus, Poseidon, Plouton, Hera and Hestia. As her name reveals («Demeter»... read more

Poseidon has been praised, by the Orphic poets, as “gaieochos” –he, who possesses the earth- and “kyanochaites” -he, who has an azure mane, thus possesses the sea. He was the god who “inhabited the foundations of the ocean” and would strike his trident, causing earthquakes and waves. He was the “stirrer... read more

The so-praised, by the Orphic hymn, as «airy-formed» and “queen of all” goddess Hera, who became the “blessed consort” of Zeus, was the daughter of Kronos and Rhea. For Homer, she was raised by Oceanus and Tethys, while others believed that it was Temenos, the son of Pelasgos, who had raised... read more