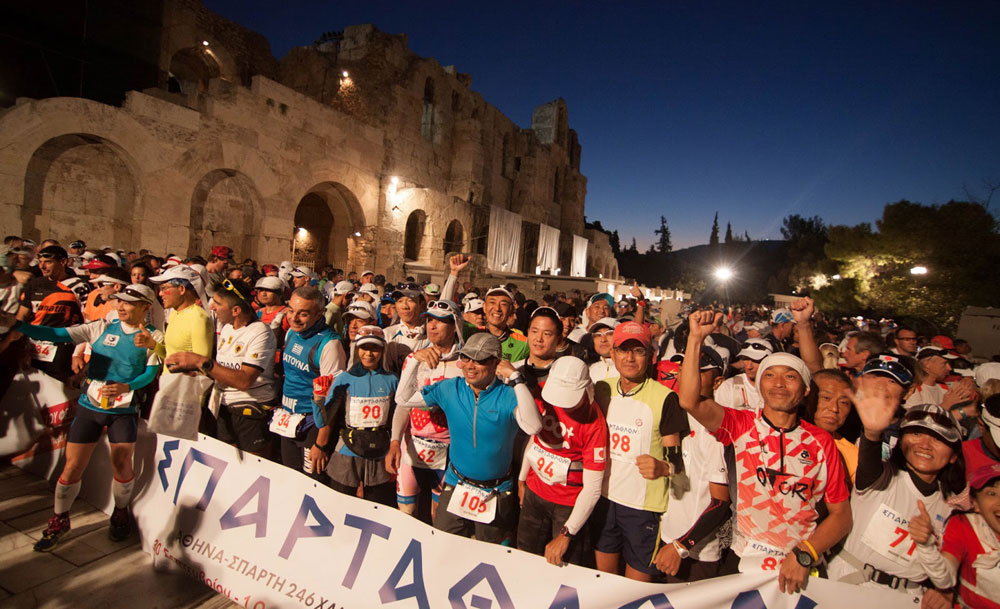 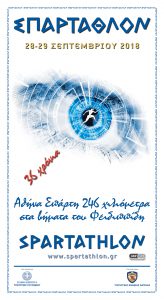 SPARTATHLON is a historic ultra-distance foot race that takes place in September of every year in Greece. It is one of the most difficult and satisfying ultra-distance races in the world because of its unique history and background.

The Spartathlon revives the footsteps of Pheidippides, an ancient Athenian long distance runner, who in 490 BC, before the battle of Marathon, was sent to Sparta to seek help in the war between the Greeks and the Persians. According to the ancient Greek historian Herodotus, Pheidippides arrived in Sparta the day after his departure from Athens.
From 1984 the International Association “Spartathlon” was founded, which since then has continuously organized the race each September. The choice of this month is because that is the time reported by Herodotus for Pheidippides’ run to Sparta

The battle of Marathon in 490 B.C. , one of the most famous battles in world history, constituted a landmark and a starting point in the history of civilization. The triumph of the genius of Miltiades and the self-denial of his soldiers made the hordes of Persians flee and rescued Athens and Hellenism from the utmost danger of subjugation to the barbarian invaders. The effects of the victory at Marathon continue to influence the present. It was the first victory against the planned domination of “Asianization” over Europe and an event with momentous significance. Because of this victory, Athens was able to achieve a great deal and bequeath the benefits of its knowledge, arts and virtue to mankind. Two and a half thousand years after that historical battle, a sports event, inseparably related to it, was born in Greece.

It all started from Herodotus’ account of the Battle of Marathon. The great historian of antiquity described the details of the battle many years later and mentioned the deeds of Pheidippides, an Athenian messenger, sent by his generals to Sparta in order to secure help for the reinforcement of the scanty Athenian forces against the forthcoming Asiatic incursion. According to Herodotus, Pheidippides arrived in Sparta on the next day of his departure” from Athens.

Spartathlon is the event that brings this deed to attention today by drawing a legend out of the depths of history. The idea for its creation is belongs to John Foden, a British RAF Wing Commander. As a lover of Greece and student of ancient Greek history, Foden stopped his reading of Herodotus’ narration regarding Pheidippides, puzzled and wondering if a modern man could cover the distance from Athens to Sparta, i.e. 250 kms, within 36 hours. He thought that the only way to find out was to try to run the historical course since he himself was a long-distance runner. Thus, he and four other colleagues from the RAF came to Athens in the autumn of 1982 and planned the run as closely as possible to Herodotus’ description. On 8th October they started their adventure to see whether their speculations could be verified. On 9th October, the next day, John Foden arrived in Sparta in front of the statue of Leonidas having run for 36 hours. His colleague, John Scholten, had arrived half an hour earlier and finally, John McCarthy got to the finish line in less than 40 hours.

The British team proved Herodotus was right! A man is really able to cover 250 km in two days.

When John Foden and his colleagues first arrived in Athens, they were warmly welcomed and supported by members of the British community and Greek friends. After the success of the first attempt, the pioneer of this event began to envision the establishment of a foot race that would bring long distance runners from all over the world to Greece for a race following in the tracks of the ancient runner. The results are now widely known. Undoubtedly the historical context of the race, closely connected to the Olympic idea and consequently with compete unselfishness, appealed to the imagination and caused unprecedented excitement amongst a great number of long distance runners throughout the world. Their response was, justifiably, immediate and catalytic. The 1st International Spartathlon was organized in 1983 with the participation of 45 runners from 11 countries as well as Greece.
The success and participation were decisive for the future and the development of the race. Thus, in 1984, the “International Spartathlon Association” (I.S.A.) was created. Since then, the I.S.A. has organized the race every September as, according to Herodotus’ account, Pheidippides’ mission to Sparta was made at that time of the year. The revival of a page of ancient Greek history is established now as one of the most famous sporting events worldwide. Great runners come to Athens from Australia and Japan, Canada and the USA, including, of course, most European countries. All of them are attracted to the uniqueness and difficulty of the race as well as the modesty and respect of the athletic ideals imposed by a race known as “mythic”

In addition, beyond its athletic aspect, Spartathlon has become a powerful tribute from which real messages of friendship and peace can be sent to the peoples of the earth without political or racial discrimination. A tribute where Greece is also promoted crowned by its unparalleled hospitality and natural beauties. Thus hundreds of runners who have participated in Spartathlon carry home their images and experiences from Greece, and are our best ambassadors abroad. 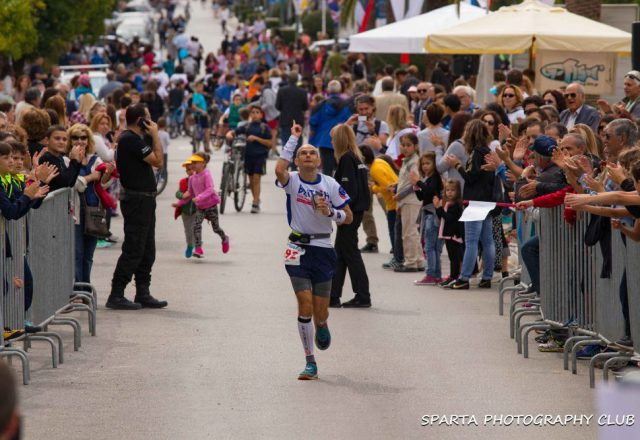 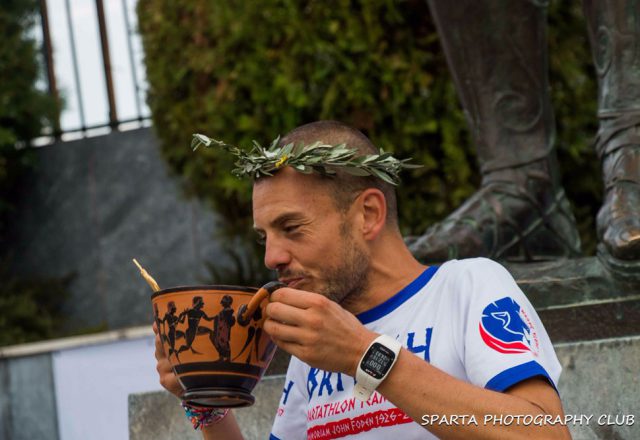 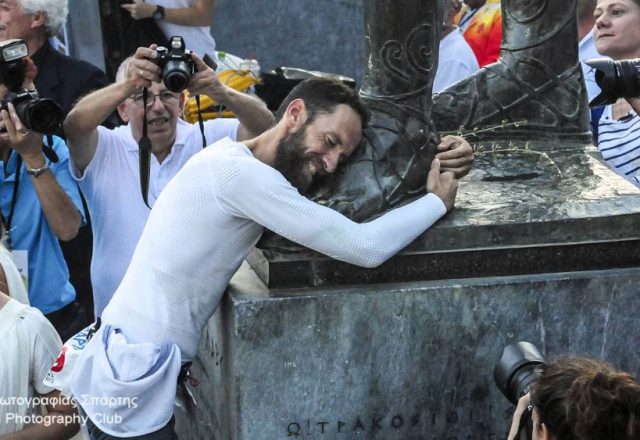 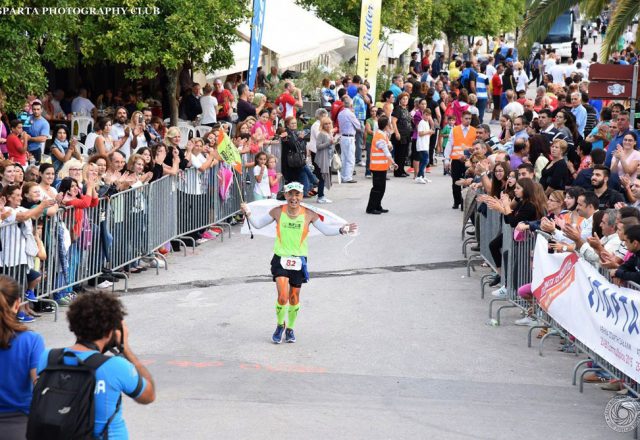 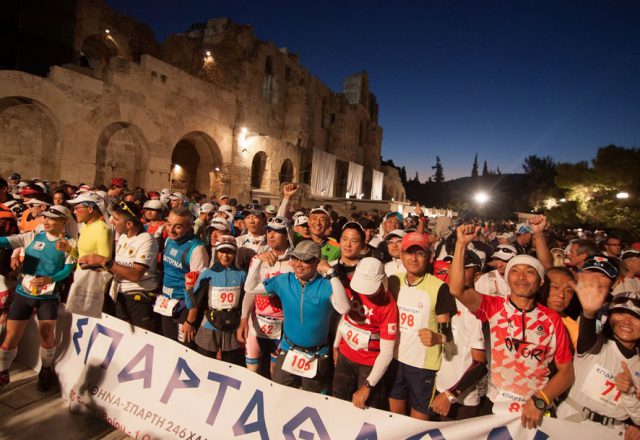 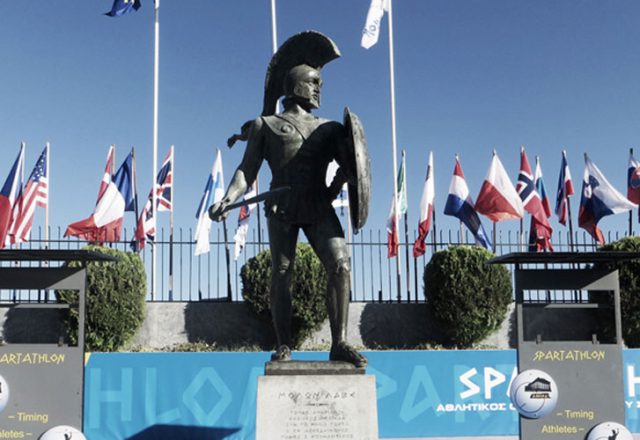 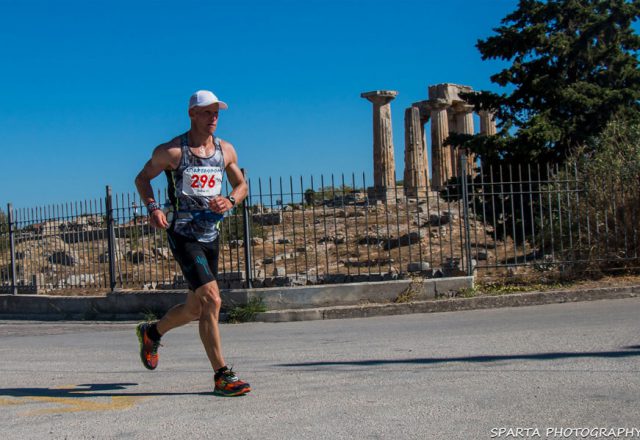 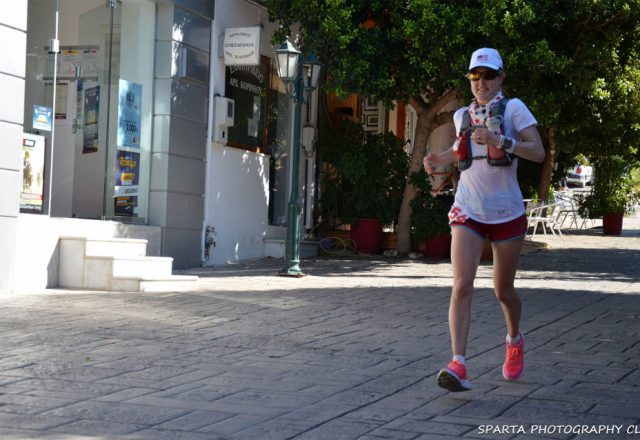 Described as the world’s most grueling race, the Spartathlon runs over rough tracks and muddy paths (often it rains during the race), crosses vineyards and olive groves, climbs steep hillsides and, most challenging of all, takes the runners on the 1,200 meter ascent and descent of Mount Parthenio in the dead of night. This is the mountain, covered with rocks and bushes, on which it is said Pheidippides met the god Pan. In 2,500 years man has had no impact at all. There is still no pathway over the mountain that is swept by strong winds with temperatures as low as 4°C. The ascent is marked out by a trail of battery-driven colored flashing lights and its challenge is a trial for human stamina and mental strength. Over the mountain the last sections are no less energy sapping and exhausting for the runners as they follow a road that winds up and down hills before descending into Sparta. Even the finest athletes start hallucinating as they cover these final stages.
Having lost all sense of time and reality, they are “on automatic” as they push their weary bodies on towards the finishing line at the statue of Leonidas. At most, only about a third of the runners who leave Athens end the course in Sparta. The goal of all participants is to cover the course within the 36-hour time limit. Setting records is the primary aim. Those who succeed in reaching Sparta have trouble finding words to describe their feelings. Spartathlon has to be lived through. It is a very personal experience in which the athletes dream about participating. Their imagination is stirred by the idea of being a modern Pheidippides, running in the footsteps of the ancient messenger. They train for years to get fit enough both physically and mentally to meet the race’s demands. 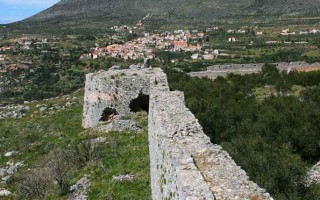 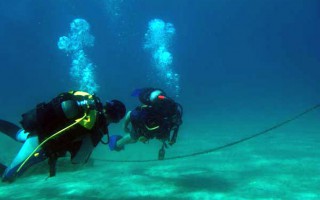 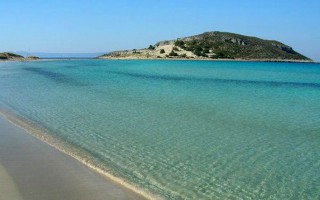